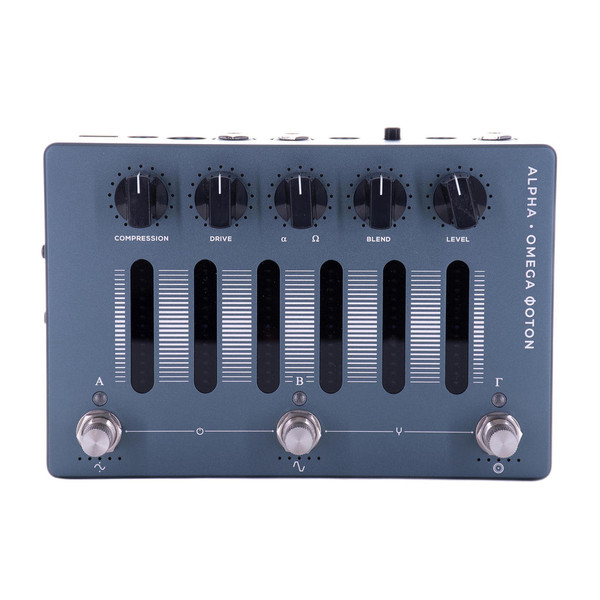 The Darkglass name represents success in bass guitar technology of the highest degree across the world. Today, the masterminds at Darkglass present an evolution in their acclaimed Alpha Omega bass distortion technology. The Alpha Omega Photon pedal takes the original Alpha Omega distortion pedal and elevates it to a new level. With the original's groundbreaking and dynamic dual distortion effect combined with a new compression effect, the tonal experience and musicality of the Darkglass classic expands tenfold.

The Alpha Omega Photon's distortion and compression effects can be engaged independently or together. Five distortion and five compression modes are loaded into the pedal and can be cycled through to find anyone's perfect match. Once the effect combination balanced is struck, the Alpha Omega Photon's touch-sensitive 6-band graphic EQ allows for deep interaction with either effect as players mix through a wide spectrum of distorted and compressed bass tones. Effect control dials accurately manage distortion output, Alpha and Omega effect mix, and compression input gain. The pedal's internal compressor automatically applies the correct amount of makeup gain so no matter how much compression is dialed in, an appropriate signal level is kept consistent.

Along with its use as a traditional pedal, the Alpha Omega Photon features advanced Darkglass technology to push the experience further. Five cabinet simulation IRs are available for players to plug in via headphones, an XLR out, or stereo line and jam along with. Additional functions include USB-C connectivity to use the pedal's audio interface capabilities with the Darkglass Suite desktop app, MIDI controller operation via 1/8" TRS output, and a 1/8" jack to function as an Aux In for playback of backing tracks through mobile phones or laptops.